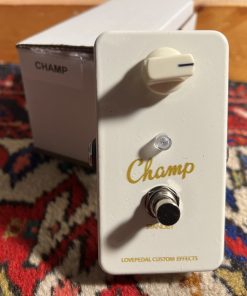 New in the box!

I LOVE my little Champ..
I will turn it all the way up and just use my volume knob on the guitar to clean up.  But sometimes late at night I can’t play through it because even a
Champ can be TOO loud at 3 am when I want to play.

So.. I worked out this lil circuit that sounds EXACTLY like MY Champ but with the ability to get whisper quite at 3 am with all the feel and tone as if I were playing the Champ dimed.Tone hounds in the know, especially those who have spent any time chasing great sounds in professional studios, have understood for years that one of the best ways to get a huge-sounding guitar track is to stick a good mic in front of a small tube amp and crank the thing up. These same players rarely use such small amps live, however, so we usually aren’t let in on the secret. Let’s open the door on the live room with the green light on and the tape running, and discover some powerful tones achieved on pint-sized amplifiers.

A noted gear head, Joe Walsh turned to one of the humblest of amps, a tweed Fender Champ, for the famous slide solo on “Rocky Mountain Way” from his 1973 solo album The Smoker You Drink, The Player You Get. This is the archetypal cranked-Champ tone, a sound that applies particularly well to slide guitar, and a theme that is echoed throughout the world of great recordings made on small amps.
The man they called God (Eric Clapton) recorded his signature song, “Layla,” on Derek and the Dominoes’ 1970 Layla and Other Love Songs album through a 3-watt tweed Fender Champ combo from the 1950s, and amp originally designed for beginners and students. Big sound, small package..
The Reverend has himself (Billy Gibbons) stated on occasions that the righteous tone laid down on “La Grange” from 1973’s Tres Hombres was recorded on a petite tweed Fender Champ. It sure sounds cranked-Champ to me.

– True Bypass switching, making sure your signal is preserved when the effect is off

Designed and manufactured by a “very smart group of people” along side musicians to create the perfect balance of touch, tone, feel, reliability and grace.